Mathematically Speaking, Even the Historical Conspiracy Theories Are Reality Somewhere

Curator’s Comment: Originally from 2013, but so timely. For other epic rap battles and much more check out our Links page.

Curator’s Comment: The American Hysterical Society is rarely interested in modern politics (except when we are), but this was too interesting a use of history to comment on modern events not to collect. 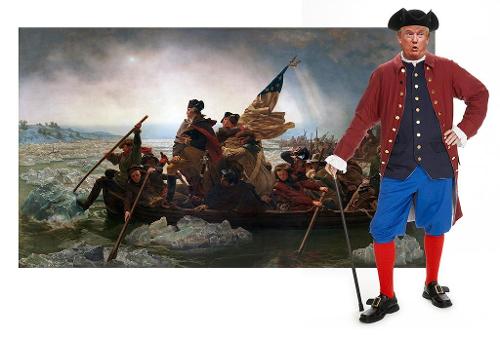 1792: “George Washington is not a hero. He’s a hero in the media because someone painted a picture of him crossing the Delaware River.” (Looks disgusted.) “The New York Times loves that painting. They put it on the front page a dozen times. The Delaware River is a total joke. I could throw a silver dollar across it.” (From a press release later issued by his campaign: “Mr. Trump was a student at the extremely prestigious University of Pennsylvania from 1772 to 1776, and was therefore exempt from military service in the Revolutionary War. Subsequently, he received a temporary medical deferment for a mild case of scrofula.”)

1836: “The Indians are coming across the border and no one is stopping them. They’re bringing in peyote and tobacco, they’re bringing in smallpox, they’re scalpers. They’re ripping off this country and the only way to stop them is — you build a wall.” (From a press release later issued by his campaign: “Mr. Trump has incredible respect for Indians and has been welcomed many times with dances and peace pipes at leading reservations. He leads all Whig candidates in polling among several tribes.”)

1860: “So Lincoln grew up in a one-room log cabin.” (Shrugs.) “I grew up in a log cabin, too. Not many people know this, but it’s true. And mine was even smaller than Lincoln’s. Only mine had a Jacuzzi. And do you know how much that log cabin is worth today? A million dollars. I own about a hundred of them all over the country, many of them on golf courses. My company is building the tallest residential log cabin in the world — 120 stories. The floors are all imported Italian dirt. I’ve had incredible interest in apartments from some of the world’s top kings, emperors, royal families. So if it’s a contest over log cabins, I win hands down.”

1904: “Teddy Roosevelt — all I know about him is he killed a buffalo. I don’t think he’s that smart. I would have picked the buffalo.” (Smirks.) “If he’s such a good hunter, why do we still have buffalo stampedes? There’s a tremendous problem with buffaloes in this country and nobody wants to stop it. I would put a stop to it in a day. The way you solve it is — you build a wall.”

1960: “John Kennedy is not a hero. He’s a hero because his boat sank.” (Sneers.) “I prefer guys whose boats didn’t sink.” (From a press release later released by his campaign: “Mr. Trump was a student at the highly selective University of Pennsylvania from 1941 to 1945, and was therefore exempt from military service in the second world war. Subsequently, he received a temporary medical deferment for a mild case of seborrhea.”)

A 2nd Amendment Point of Order, or Did You See the Muskets He Had?

33 Famous People If They Were Born in Different Times

Some of our favorite historical figures just always seemed destined for greatness. We asked you to show us what amazing feats these people would’ve pulled had they been born in a different era. The winner is below, but first the runners-up …

And the winner is …

Pinky & the Brain – When Mice Ruled the Earth

Was It Always This Way?

By T.H. Gray
DISCLAIMER: The American Hysterical Society does not receive any goods, services, or support from J.C. Penny. If we did, we’d be much, much happier.

J.C. Penny produced a series of commercials earlier this year featuring Ellen DeGeneres asking if annoying shopping experiences were always this way. These are her answers:

and because outtakes are always funnier than the broadcast:

What If George Washington Were Here Today