Thus the Question, “If It’s Tourist Season, Why Can’t We Shoot Them?”

Bringing History and Visitors Back to Colonial Williamsburg

Curator’s Comment: In the past the American Hysterical Society has been openly critical of the Colonial Williamsburg Foundation’s 2013 and 2014 advertising campaigns (it seems they have deleted the most egregious; we hope it’s because of something we said). The following is our attempt to make amends and offer some helpful suggestions.

As we have noted before, history doesn’t sell. Just ask any site who offers a well-researched horse engine day or tea party, or if that tight stitch count has got ‘em flocking in. If history did sell then our work would be well funded, we would all be rockstars, and Colonial Williamsburg would still be a historic site.

In case you haven’t noticed, Williamsburg has spent the better part of the last year transforming into a low-rent Busch Gardens. Or to quote President & CEO Mitchell Reiss, trying “to do some things we’ve never done before to make this special place even better.”[1] So with tenuous historical connections and what their marketing folks think has mass appeal, the Foundation has added a shooting range, a petting zoo, a doggy mascot, pirates, and an ice skating rink to their “historic” experience.

As Reiss said, “You’ll notice us paying more attention to first-time visitors and families who have chosen to invest their hard earned vacation dollars for a trip to Colonial Williamsburg instead of [Disney’s] Magic Kingdom.” They’re targeting families because they think that’s where the money is. However, most families are too budget conscious to feed Williamsburg’s voracious coffers.

No, the real revenue is in providing extreme lifestyle experiences for underserved audiences looking for the unique, the challenging, and the thrilling.[2] This audience includes masochists, sadists, body modifiers, and mixed martial artists. There’s a lot of money in pain and blood. And Williamsburg is perfectly suited to simultaneously profit from this growing demand while creating historically-grounded interpretation.

Along with being immersive experiences, they are also a fully interactive ones. And boy will they draw a crowd! This has every potential to be the first truly exciting museum program ever.

Each of these ideas brings to bear all of CW’s resources, historic trades to make the nails, weapons, gallows, and rope, educators to help explain the background of each option to participants and guests alike, living history skills to ensure authenticity, and food service to help keep tummies full and wallets empty. 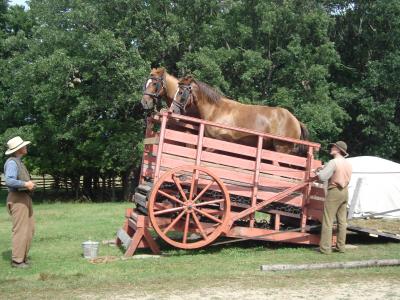 The choice is simple: Does Williamsburg want public programs that look like this…
Source.

We know what you’re thinking: that doing any, much less all, of this would take real audacity. We say it’s less audacious than opening a skating rink on Duke of Gloucester Street and, with a straight face, calling it a “magical experience.”[4]

1. We truly thought he was going to say “specialer.”

2. And need we mention they are likely first-time visitors?

3. All  medical or coroner’s bills are included in your fees!

4. The Disneyfication isn’t even subtle.

Don’t you wish your tour included such a fun homophone?

Have you ever seen a historical marker which so shakes you up that you find yourself contemplating it for the rest of the trip?

However, Norm Magnusson hopes to get you to do just that. But instead of history, he is sculpting thought-provoking social commentary into blue and gold historical markers. These markers will be sprinkled about I-75 for all to see, contemplate, and argue with.  Our favorite (of the ones he had posted on the internet) is:

You can find his explanation for the project here. The official web page is here.

We at the American Hysterical Society would like to propose a “historical marker” which reads: On This Spot stands a historical marker whose greatest influence is to make sure you remember to take the next right.

Hopefully Magnusson’s historical markers will have a greater impact than the ones out there now.

Family vacation. Who doesn’t look forward to that every year? The kids are out of school, the parents are off work and everyone is hopping into the car and going to do something rad. It’s important to choose your family vacation destinations wisely. If you have children, go to an amusement park. If you have no children, sit on as many patios as you can while power drinking. But under no circumstances, ever, should you blow a family vacation on visiting a national monument.

I certainly understand the allure of driving hundreds or even thousands of miles to see the Grand Canyon in person. Actually, I’m just joking, I don’t get the appeal at all. I’ve never seen it, but I expect it looks a lot like this …

Another good example of this is Mount Rushmore. You probably know it from pictures, where it looks like this …

But as someone who has seen it, I can vouch for the fact that, in person, it looks a lot more like this …

Right, those are the exact same picture, because that’s exactly what Mount Rushmore looks like in person. What is it that you think you’re going to do when your Wally World-like trek to see four presidents’ faces carved into the side of a huge rock comes to fruition? It’s not like you can climb up there and take a picture of you pretending to put your dick in Lincoln’s nose or anything. You’re just going to stand there, take a few pictures that will look like the epitome of shittiness when compared to stuff you could just download from the Internet and then spend the rest of your vacation bored to tears because western South Dakota is a desolate hellhole with nothing even sort of fun to do. And it’s going to be the exact same story at any of the other remote tourist destinations people flock to every year.

To its credit, though, Mount Rushmore does have fireworks every Fourth of July. Ha! Just joking. They stopped doing that years ago. But it doesn’t matter, because the lamest of all lame outdoor activities is .

“Hey, you know what would be fun, a trip to the museum!” The preceding sentence is something no person has ever said with any semblance of honesty in their voice. Don’t get me wrong, I know people claim to love museums. I’m sure tons of them will take to the comments section and call me an unsophisticated philistine for not feeling the same way. But that doesn’t mean they’re correct.

Deny it all you want, but the truth is that arriving at a museum is right on par with arriving at one of those national monuments that I made fun of last time around. Once you get there, literally the only thing you can do is look at a bunch of shit that you could just as easily see in a book or on the Internet. But at least in a book or on the Internet you could just skip over all the boring shit without feeling guilty about it. That’s not the case at a museum. Instead, you have to stop every 50 feet or so and pretend you give a damn about what’s written on the placard below whatever lifeless artifact you’re looking at. Otherwise, you look like some maniac who pays $30 just to power walk your way through the Ice Age exhibit.

Getty
A stock image search assures me that this picture is what the Ice Age looked like.

When you get right down to it, museums are basically zoos for inanimate objects. Paying an admission fee to enter a place where everything is locked away so you can’t touch it is a fine idea if the stuff you’re looking at is flinging feces at unsuspecting spectators or swinging around on ropes and whatnot. That’s just a barrel of fun. But not once in recorded history has a painting ever leaped from its enclosure and mauled the teen who had been mocking it. Real live angry tigers know how to entertain a crowd, and they don’t need a ridiculous Glamour Shots for Men backdrop behind them to do it. That’s more than can be said for the stuffed animals in the above photo.

“But if I could pick a backdrop, this would be it.”

Let’s be honest, nobody loves going to museums. What people do love, though, is anything that makes them seem a little bit more cultured and educated than the rest of us lunkheads who just waste away our free time ogling boobs and betting on cockfights. People don’t go to museums because they get off on looking at a collection of fossils — they do it because it gives them an excuse to shake their head in pity while muttering “You just don’t get it” under their breath. Anyone who claims otherwise is either the most easily stimulated tourist of all time or a straight-up liar. Sorry, museum fans, there is simply no middle ground to be had there.

This is a very popular dish and will work for any period before 1900. Although it has many local variations, since 1926 it has been remarkably the same.

Sprinkle the mixture liberally with the following according to taste or financial constraint:

1 Set of stocks
Horse & buggy rides
Spinning wheels & looms
Butter churns
Candle-making equipment
Quill pens
Field for playing graces and rolling hoops
Guides dressed in look of target period
1 Militia unit (must have operable firearms and a drum)
Although you should make sure to cast everything as either a male or female role or space, remember to strain out any taste of sexism or racism. This recipe is best without such distracting details.

Toss the ingredients together and serve.

At first taste this is a very spicy dish, but it will go bland upon repeated servings.

According to consultants this will serve 300,000 to 500,000 visitors annually, though results may vary. 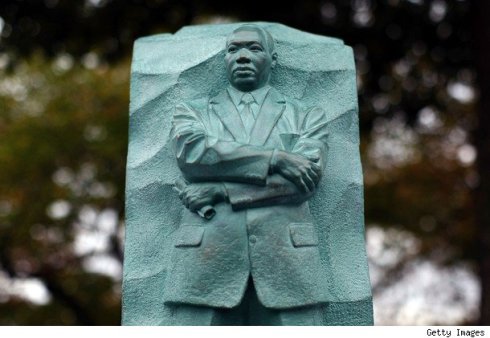 They did so by freezing him in carbonite like Han Solo. 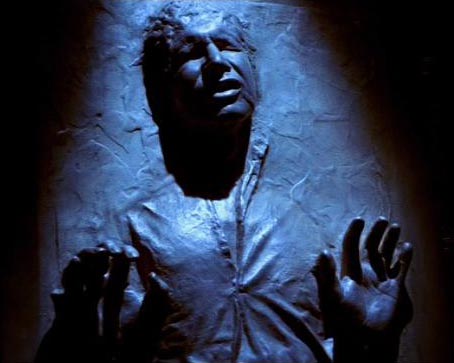 Or at least that’s what the monument calls to mind. Which is further proof 0f the enduring legacy of Star Wars in white culture.