Curator’s Comment, Part the First: Beverly Serrell, in her opening paragraph to Chapter 6, said exhibit labels should provide, “information about objects accessible to visitors with different backgrounds and interests.” This may not be what she had in mind (even if it might be effective):

Curator’s Comment, Part the Second: Or you could skip all that layering and just write compelling, provocative labels, like Walter Liedtke, who died tragically last year, did. Here’s his label for the Merrymakers at Shrovetide:

Students across America will soon be taught the far left’s take on American History should proposals agreed on during high-level closed door meetings ever see the light of day.

A secret panel has convened to re-write history books in accordance with Common Core principles under the direction of civil rights leaders and advocacy groups. Unconfirmed, but reported attendees of the conference include President Obama, Secretary of Education Arne Duncan, Morris Dees of the Southern Poverty Law Center, GLAAD Executive Director Sarah Kate Ellis, and members of the “Black Lives Matter” group.

Dr. Cornel West was invited to the conference, but a prior commitment made him unavailable.

The meeting is being hosted by the Howard Zinn Education Project, which coordinates two non-profit organizations advocating what they claim to be “more accurate, complex, and engaging understanding of American History.” In other words, prepare for a socialist indoctrination of your children underwritten by one of the furthest left authors in American History…a naked socialist, if you will.

Topics of special urgency among the attendees include the Constitutional Convention, Causes of the Civil War, the 1960’s radical anti-war and civil rights movements, and a thorough rethinking of the Reagan Administration. The gathering wishes to expunge God from society and classify the Constitution as a secular document. The Civil War would be looked at as a class struggle, as will other noble wars fought during our nation’s growing period and development as a world leader. Special praise to the radical 60’s peace and civil rights movements and equal disdain for the Reagan Revolution are also proposed.

This is the kind of garbage that your children will be learning should this revisionist history be forced down their throats.

Howard Zinn, author of the popular screed, “The People’s History of the United States,” advocates abject Socialism under the guise of how America has oppressed working people, women, and minorities through a discriminatory capitalist system that rewards the rich and “continues to steal from everyone else.”

Dean Swift on the Secrets of Interpretation

His digressions are more eloquent than most days-long conferences.

To those museum professionals who think they have discovered a new way to engage visitors, that is to entertain them, we offer the following.

And to those professionals who say education is the sole and perpetual purpose of museums, until those others dumbed it down, we offer the following.

The following is Jonathan Swift’s “A Digression in the Modern Kind” from his 1710 work A Tale of the Tub. It seems your arguments and the thought that your thought is new are nothing new.

We whom the world is pleased to honour with the title of modern authors, should never have been able to compass our great design of an everlasting remembrance and never-dying fame if our endeavours had not been so highly serviceable to the general good of mankind. This, O universe! is the adventurous attempt of me, thy secretary;

To this end I have some time since, with a world of pains and art, dissected the carcass of human nature, and read many useful lectures upon the several parts, both containing and contained, till at last it smelt so strong I could preserve it no longer. Upon which I have been at a great expense to fit up all the bones with exact contexture and in due symmetry, so that I am ready to show a very complete anatomy thereof to all curious gentlemen and others. But not to digress further in the midst of a digression, as I have known some authors enclose digressions in one another like a nest of boxes, I do affirm that, having carefully cut up human nature, I have found a very strange, new, and important discovery: that the public good of mankind is performed by two ways–instruction and diversion. And I have further proved my said several readings (which, perhaps, the world may one day see, if I can prevail on any friend to steal a copy, or on certain gentlemen of my admirers to be very importunate) that, as mankind is now disposed, he receives much greater advantage by being diverted than instructed, his epidemical diseases being fastidiosity, amorphy, and oscitation; whereas, in the present universal empire of wit and learning, there seems but little matter left for instruction. However, in compliance with a lesson of great age and authority, I have attempted carrying the point in all its heights, and accordingly throughout this divine treatise have skilfully kneaded up both together with a layer of utile and a layer of dulce.

Comedians Give Tour of Portland Art Museum, or This is the Next Room Full of Paintings

The Dangers of History-Based Play

Lest Historians Are Too Sure of Themselves 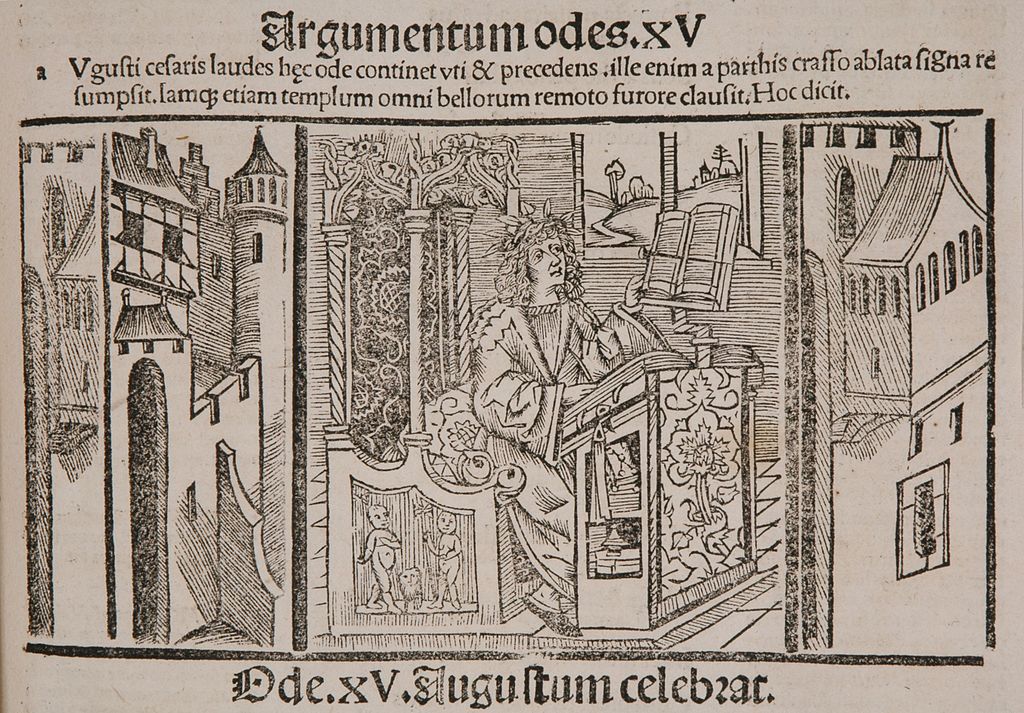 Horace in his Studium not thinking what you think he’s thinking. Source.

Old Horace, on a summer afternoon,
Well primed with sweet Falernian, let us say,
Lulled by the far-off brooklet’s drowsy croon
To a half -doze; in a hap-hazard way
Scratched off a half a dozen careless rhymes,
As was his habit. When next day he came
Awake to work, he read them several times
In vain attempt to catch their sense and aim.
“What was I thinking about? Blest if I know!
Jupiter! What’s the difference? Let them go.”

“Lines twelve to twenty are in great dispute,”
(Most learnedly the lecturer doth speak)
“I think I shall be able to refute
Orelli’s claim they’re taken from the Greek.
I think, with Bentley, Horace’s purpose here
Is irony, and yet I do not know
But Dillenburger’s reading is more clear
For which he gives eight arguments, although
Wilkins gives twelve objections to the same.”
(So on ad infinitum.) Such is fame.

How to Make History Dates Stick

Curator’s Comment: “Only effective when done by the pupil and not the master.” It seems that learning dates has always been hard and interactive history interpretation is nothing new.

Sure, Objects Speak For Themselves…